The Formation of the RSL

The Commemorative Ritual has four parts: 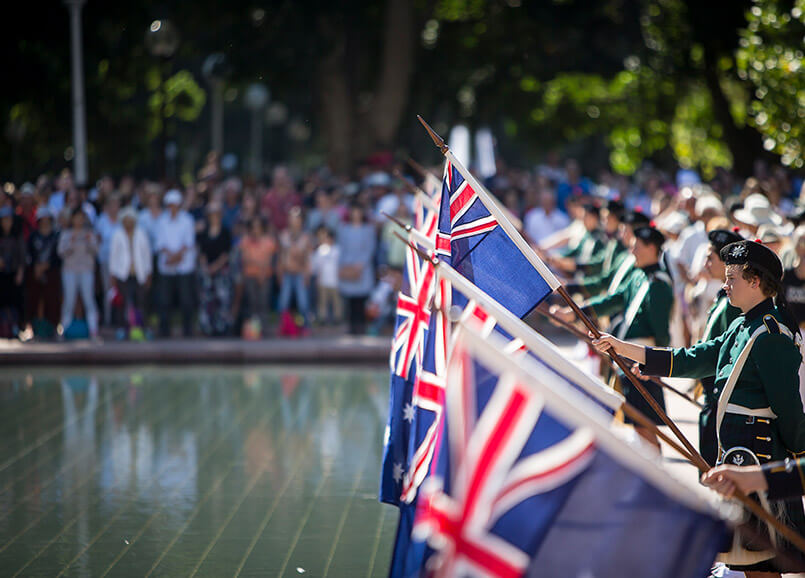 Written in 1914 by Laurence Binyon, the Ode is the fourth verse of his poem, For the Fallen. It was used at commemoration ceremonies by the British Legion soon after World War I and in 1920, was adopted as “The Ode” in all British Commonwealth countries.

“They shall grow not old, as we that are left grow old:
Age shall not weary them, nor the years condemn
At the going down of the sun and in the morning
We will remember them.”

Excerpt from Laurence Binyon’s poem, “For the Fallen”

Should be sounded immediately after the last line of The Ode is repeated by those in attendance.

In earlier times when English troops fought in Europe, Retreat was sounded when it became too dark to fight and the soldiers retired to the nearest town or village where they spent the night. Sentries were placed at the entrances of the camp or town. When the Duty Officer marched the sentries around the town to man their posts he was accompanied by a bugler who sounded “First Post” when the first sentries were posted and “Last Post” when the camp was finally made safe by manning the last entrance.

At a funeral or commemoration service sounding “Last Post” symbolises that the dead soldiers have ended their journey through life.

Shortly after the end of World War I George Honey, a Melbourne journalist in London, was dismayed that, in the noisy celebrations that marked the end of the War, no thought had been given to the human sacrifice that had made the celebration possible. He suggested that all people should stand in silence for five minutes in memory of the Fallen. Tests by the Guards showed that five minutes was too long and King George V accepted that The Silence should be two minutes in length.

In 1997, our Governor-General issued a proclamation recommending that The Silence be for one minute, which is what we observe today.

The final line of Rudyard Kipling’s hymn The Recessional is a warning of what might become of us if we forget the power of The Lord. The phrase was adopted for commemoration services to warn us that, if we forget the sacrifice of those who died in War, we are likely to repeat the futility and obscenity of armed conflict. The expression is normally used to mark the end of The Silence and serves as a cue for Reveille to be sounded.

Reveille is the bugle call that awakens servicemen and women at the start of the day. There are several Reveille calls, any one of which may be sounded at dawn. During the day the shorter, more raucous, “Rouse” is sounded. In commemoration services it signifies the resurrection of the dead soldier into the after life.

Give us a call